Before last week, when I thought of Chicago, it was dirty, dark, and violent. Have I seen too many movies? My trip to Chicago for Book Expo America showed me a completely different side of the town! Granted, our hotel was in the “North River” area, and I never ventured into the South Side to see Leroy Brown, but our visit was spectacular.

As a librarian should, I read some books before getting on the plane. Besides Fodor’s and Lonely Planet’s guides to Chicago, I read The Devil in the White City, by Erik Larson. This nonfiction account of the Chicago World’s Fair in 1893 introduces the reader to the leading names in architecture of the time, the men (and one woman) who built what they considered the first truly American city. If you can stomach the chapters on the serial killer who was quietly causing young women to disappear at the time of the fair, this book reads like an exciting novel. Larson laces in the names of many historical figures who wove in and out of Chicago’s narrative at the turn of the last century.

David was able to accompany me on the trip, and we caught a morning flight so that we could take in the Art Institute in the afternoon. It was glorious! So many treasures that I had always wanted to see. We did not have time to go to the special Van Gogh exhibit—the museum closes at 5:00!— but they had other works of his in their permanent collection, anyway. Here are some of my favorites. 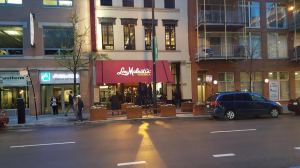 That first evening, we crossed another “must” off of our list by sampling Chicago-style deep-dish pizza at Lou Malnati’s, recommended by a friend who is a former Chicagoan. It tasted fresh and delicious, but I have to say that New York pizza is the real thing for this east-coast girl. 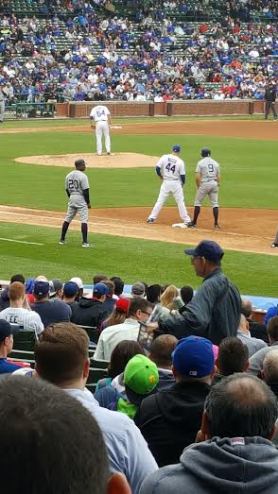 I had professional sessions all day and night the next day, which I’ll get to in a later article, but David took advantage of the time by taking in a Cubs game. Since he’s a South Carolina guy, he’s never met a stranger, so he made friends with a Michigan couple in the hotel elevator who were also headed to the game. They taught him all about the train system, and they rode together to Wrigley Field. David took pictures of the houses all around the field that have benches on the roof! The owners rent the space. Clever! David got a ticket for a cheap seat online, but as the game wore on, the ushers wore out, and he was able to wander down to snap a photo this close.

The Chicago Architecture Foundation’s river tour of the city was a highlight of our trip. Even though it was a chilly, cloudy morning, this 90-minute cruise featured all three branches of the Chicago River, narrated by a brilliant architect/ docent who knew all of the technical information as well as fascinating anecdotes of Chicago history. I discovered, to my own surprise, that my favorite styles of architecture were Art Deco and Post-Modern. Although it started to rain and the temperature dropped to what would be winter temps in North Carolina by the time we got to the edge of Lake Michigan, this tour was worth every penny. If you go to Chicago, do not miss it. Here are some of my favorite buildings: 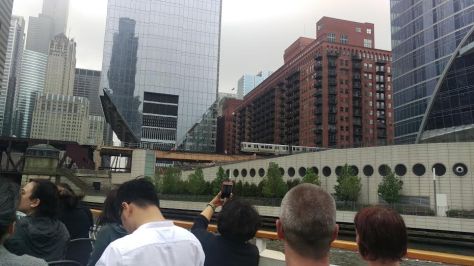 As you can imagine, real estate is at a premium in downtown Chicago, so architects get creative. If you look closely, you will see that the glass building in the center is being built on a wedge-shaped base, as if it were an arrow thrust into the ground. Amazing engineering.

After professional workshops that afternoon, our entire group of librarians was invited to the Sourcebooks Publishers cocktail party at the top of the Hancock building, Chicago 360. What a view! The entire room on the 94th floor is surrounded by ceiling to floor windows. David took photos for hours, catching the changing light over the city and the shores of Lake Michigan. The picture at the top of this post was from this vantage point, and my husband was brave enough to do the Tilt! They put you in a little glass box and tilt it out 30 degrees so that you look down on the city. Although the light was behind him, I can attest that he is the person all the way to the right. At the maximum tilt, he let go of the handles and spread out his arms like Superman. A couple of my colleagues also took the dare. I stood a safe distance away and had an extra cocktail in their honor.

We ended the week at Quartino’s Italian Restaurant, where I had a bowl of tentacles. Not what I expected, but the Frutti di Mare featured more octopus than I had anticipated. We shared lots of other goodies, so it was alright. Great food and a lively place filled with locals. An excellent finish to our trip!

But wait! There’s more! The real reason for our journey to the north was the Book Expo America. In the next posts, I’ll let you in on all the book news and views that I learned from authors and publishers in one info-packed week.