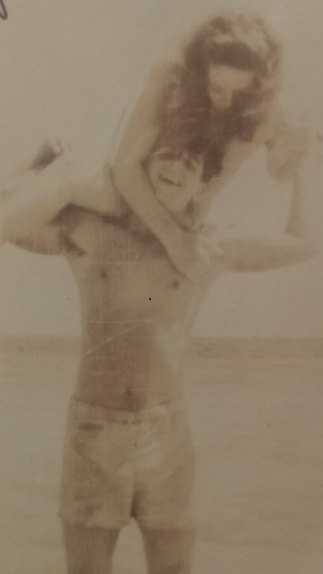 The war ended, as all wars eventually do, and society had to rearrange itself into having young men and young families in its midst again. Margaret and Walter rented her Auntie Taggart’s second floor for five dollars a week, and Walter went to work at the mill. Thanks to the G.I. Bill, he also began attending evening classes at the Rhode Island School of Design for textile design.

Walter had been home for some time, and Margaret began to be worried. She still had not conceived, and they both wanted children. She had taken some secretarial courses and was working hard, and she had been banking Walter’s paychecks from the Army. Between their little nest egg and the G.I. Bill, they had enough money for Walter to start building a house in his unimaginable spare time between working and going to school. Margaret so wished for one of the bedrooms to be a nursery.

About the time that her parents began to despair of inventing new comforting words for her as she said each month, “I think I might be pregnant!”, only to be disappointed days later, Margaret finally gave birth to Allan William in July of 1948. One of the first Baby Boomers, Allan joined a nation awash in happy parenthood. As his first harsh New England winter settled in, Margaret wrapped baby Allan up, put runners on his stroller, and pushed him several miles through the snow to their homesite, bringing dinner to Walter, who was still toiling away on a pretty, little ranch house down the road from his parents. They had given the newlyweds a building site on the family land on Ernest Street.

It wasn’t long before they moved in, and Margaret blossomed into her longed-for role of wife and mother. Like most women of her time, she was devoted to Dr. Benjamin Spock, whose Baby and Child Care was the Bible on all things childrearing. Little Allan was on a schedule: wake, breakfast, bath, nap, walk, lunch, nap, and so on. Her father, Archie, loved his grandson, but he knew that if showed up during nap time, he would not be allowed to see him, so he would walk around outside to Allan’s bedroom window and sing “On Top of Old Smokey.” Allan would wake up, delighted to see his Grandad, but Archie would have to endure a scolding from his brisk, orderly daughter. It was worth it.

Allan was still a baby when Margaret conceived again, and in due time she had another son, Robert Walter. He only lived two days. Margaret had to share a hospital room with another woman whose newborn was presented to her several times a day for feeding, and Margaret would ask the nurse, “Where is my baby?” only to be told that the doctor would come talk to her later. Since she was only twenty-two and quite shy, she did not know what to do. Later, she found out that Robert was a “blue baby,” that is, a baby whose mother’s blood was RH negative, while the father was RH positive. Walter, his mother, and any other devout Catholic who saw him baptized him themselves right in the hospital, since they believed that unbaptized babies went to Limbo, a place of nothingness between heaven and hell. When Robert’s time on earth was over, Walter’s parents gave them a burial plot, and Margaret was forced to stay in the hospital during her baby’s funeral, weeping while her roommate cooed and played with her new baby.

These days haunted Margaret for the rest of her life. Because they lived in a small town, the doctors did not know that they could have saved Robert’s life with a blood transfusion. In addition, they had not yet invented the injection that is now routinely given to RH negative women after their first birth—which is always successful—that would have allowed her to have normal pregnancies and healthy babies in the future. Instead, she went on to have six fairly late-term miscarriages in the next decade, during which she was almost always pregnant, but still had only one living child. The doctors dismissed the pregnancies as just tissue that her body was rejecting, but Margaret mourned inwardly, although no one joined her in her grief. She was expected to pick back up and move on. It was not until she saw the ultrasound images when my sister and I were pregnant decades later that she realized that she had been right to grieve for what were obviously fully-formed babies, and she was newly angry over the cruelty of the doctors—and the world in general—toward all those loving young women with broken hearts.