The last time we visited our porch progress was on December 1st! Well, after all of the excitement of the holidays, the guys got back to working on our screened porch, which was just so much more complicated than I expected. By the time they had finished the interior work, the porch had a roof and a floor, but the posts were unfinished, and the walls were still Tyvek plastic wrap!

Everyone who asked me about Christmas discovered that my wish list was all about the porch. Our color scheme will allow me to have lots of fun with our last name, so we’re going with a dark wood ceiling, dark wicker furniture, white posts and railings, white cushions, and lots of pops of teal. I picked out a set of outdoor dishware at Pier One, and between gifts and gift cards, I was able to get 8 place settings of the whole thing! They call it turquoise, but I’m saying teal. I also found a teal lantern on clearance. My friend Andrea Pearlstein of BookPearls created this beautiful collage “T” for our wall, and David gave me a tiny peacock table for between the rockers—just big enough for two coffee cups.

The carpenters built up the posts around the porch and gave them the shape I showed them from a picture in Southern Living. I didn’t expect the side trim, but that’s because the Southern Living porch was not screened. Each section of the porch has a separate section of screen, so if there is a tear (oh, no!), we only have to replace that section.

They wrapped the posts in a weather-proof material so that it will look beautiful year after year. After putting new siding on the walls, they started painting. There was so much painting to do! 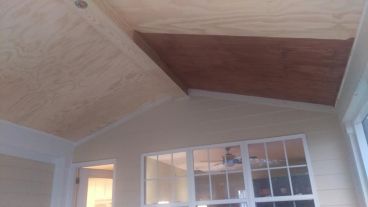 One of the most difficult parts of the porch was finding the right stain for the beadboard ceiling. We wanted to match the acacia flooring inside the house, so Greg gave us the Minwax brochure, and then created eight samples from the colors we chose. None of them were right! Most of them looked the same—blackish-brown—with one or two orange boards. Greg agreed that nothing worked, so he took a piece of our floor and an unfinished piece of our ceiling to Sherwin-Williams so that they could create a custom color. Beautiful. However, what a mess to apply! The guys used a sponge to wipe the stain above their heads, and it was watery and ran everywhere. This took several days, and I know they were glad when it was over. Afterward, they coated the ceiling with a semi-gloss, weatherproof sealant. It has swirls of light and dark, just like our floor. Landon then had to paint over the smears on the yellow siding and white trim.

Way back when, I had chosen a fan for the porch with tropical leaf blades. However, when the electrician came out to do the first phase of his work, he told me that I would have to have multiple switch boxes on the wall beside the back door if I had all of the floodlights on separate switches and the fan and fan light on separate switches. So, I compromised by putting two of the floodlights on one switch and choosing to get a fan with a remote control, so that there was only one wall switch for it. I had no idea that the original fan was in my garage until the day that the electricians were coming back to install it. It did not have a remote control, just chain pulls hanging down! We had to cancel the electricians for the day and go on a hunt for an appropriate fan. Perhaps it would have been easier in June, but our local home improvement stores did not have outdoor fans with remote controls in stock, even at the warehouse. Amazon came through for me, though. We found one with rattan, leaf-shaped blades that match the wicker rockers. Two-day Prime shipping, and we’re back in business.

The electricians came through and put up the fan, floodlights, and four of the ugliest outlets I have ever seen. This is the building code. They are on these little pipes because they have to be high enough off the floor that if rain hit the floor, it wouldn’t splash onto them, which is actually safe. I’ll have to arrange furniture to hide them. I was hoping to put a glass side table over one of them, but of course, the outlet is higher than the table.

We had final inspection last week! We failed. The two stairways, one from the porch and one from the new kitchen door, needed adjustment, because the code had recently changed concerning the height of the top and bottom steps. Furthermore, they needed to dig a drain pipe coming out from the breakfast room crawlspace. All that has been done, and all of the piles of lumber and materials have been removed from the yard.

Mason used a backhoe to take away the big rocks and chunks of cement that were dug up when the foundation went in, and then smoothed the yard and spread grass seed and hay. Unfortunately, we’ve had a lot of crows hanging around lately, and I think the grass seed may have been devoured. The backhoe is still sitting in the yard, waiting on the final inspection tomorrow.

The weekend weather forecast was so beautiful that I texted Greg on Friday and asked, “Can we put furniture out on the porch, or do we have to wait until after the inspector leaves?” He replied, “Put it out!” So we did, and I have lived out here every minute that I could. Saturday morning, I told David, “I plan to read and write on the porch as much as I can today,” and when I walked outside a couple of hours later, I saw that he had already set up my laptop, ready and waiting for me. Husband of the year.

We have a long way to go on furnishing the porch, and we have already discovered that we will definitely need blinds, especially when the weather heats up! But the woods behind my house are so peaceful. The peepers are singing, and the barred owls must think it’s spring, since their calls end in long whirr-rr-rrs. And I’ve got a rocking chair, so if you need me, I’ll be on the porch.

Update! We passed inspection! It’s all ours now.